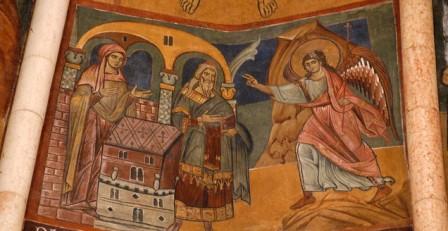 This week’s theme shows how special and significant is the birth of John the Baptist — announced in the temple to the boy’s father, a priest. But it also has lessons for us as disciples. Zechariah certainly lives his life to follow the God he loved, but his faith falters. What can we learn from his faith that we can apply to our own? The story begins carefully placed in geography and time. Luke relates this not as a timeless legend, but as an historical event.

“In the time of Herod king of Judea there was a priest named Zechariah, who belonged to the priestly division of Abijah; his wife Elizabeth was also a descendant of Aaron. Both of them were upright in the sight of God, observing all the Lord’s commandments and regulations blamelessly. But they had no children, because Elizabeth was barren; and they were both well along in years.” (1:5-7)

We meet Zechariah and his wife Elizabeth, an elderly, childless couple. According to Mosaic law, priests weren’t required to marry a wife from the Tribe of Levi (Leviticus 21:7, 13-15), but for a priest to have a wife from Levi’s tribe was considered a twofold honor. Religious workers in Israel were divided into two groups, priests and Levites. All were descended from the Tribe of Levi, but, additionally, the priests were descendants of Moses’ brother Aaron. Priests were set apart for a special ministry in the Temple with regard to the worship of God that took place there.

This day, Zechariah is “chosen by lot” to go inside the temple and burn incense on the Altar of Incense in the Holy Place. It was at that point that an angel of the Lord did indeed enter the Holy Place.

What a contrast with Mary, who when the birth of Jesus is announced, doesn’t respond with “How can this happen?” like Zechariah, but “How will this happen?” and, “I am the handmaiden of the Lord. May it be to me as you have said” (1:34, 38).

What can you do to nurture an attitude of faith, of belief, of spiritual sensitivity and openness? I think it begins with humility, repentance, and prayer. When you see unbelief in yourself, don’t excuse it, but be ashamed and ask God’s forgiveness. We are disciples on a journey with Jesus. Even if we have some rough areas in our lives, as we walk with Jesus, he would refine us to be worthy disciples. God can make a wonderful disciple out of an old, set in-his-ways priest and an impulsive fisherman. What can he do for you? – H.E. Mor Theethose (Titus) Yeldho, Archbishop